The idea of concept store may seem vague since it is characterizing all kinds of innovative or unusual stores. To better understand its specific character, let’s focus first on the origins of this very specific store format.

According to Wikipedia, the concept store is “a marketing concept describing a business thematic detail. […] It is characterized by the staging of creative universes mixing products and multiplying trends. ”
In my opinion, and following my numerous interviews with concept store owners, this is a multi-brand point of sale, with a selection of products that match with a thematic universe, a philosophy of life, and/or a particular lifestyle. These stores are not just places to buy, they are places of learning and inspiration. Even if it means slowing down the buying process.

Bazaar from Mary Quant, the first concept store in the world 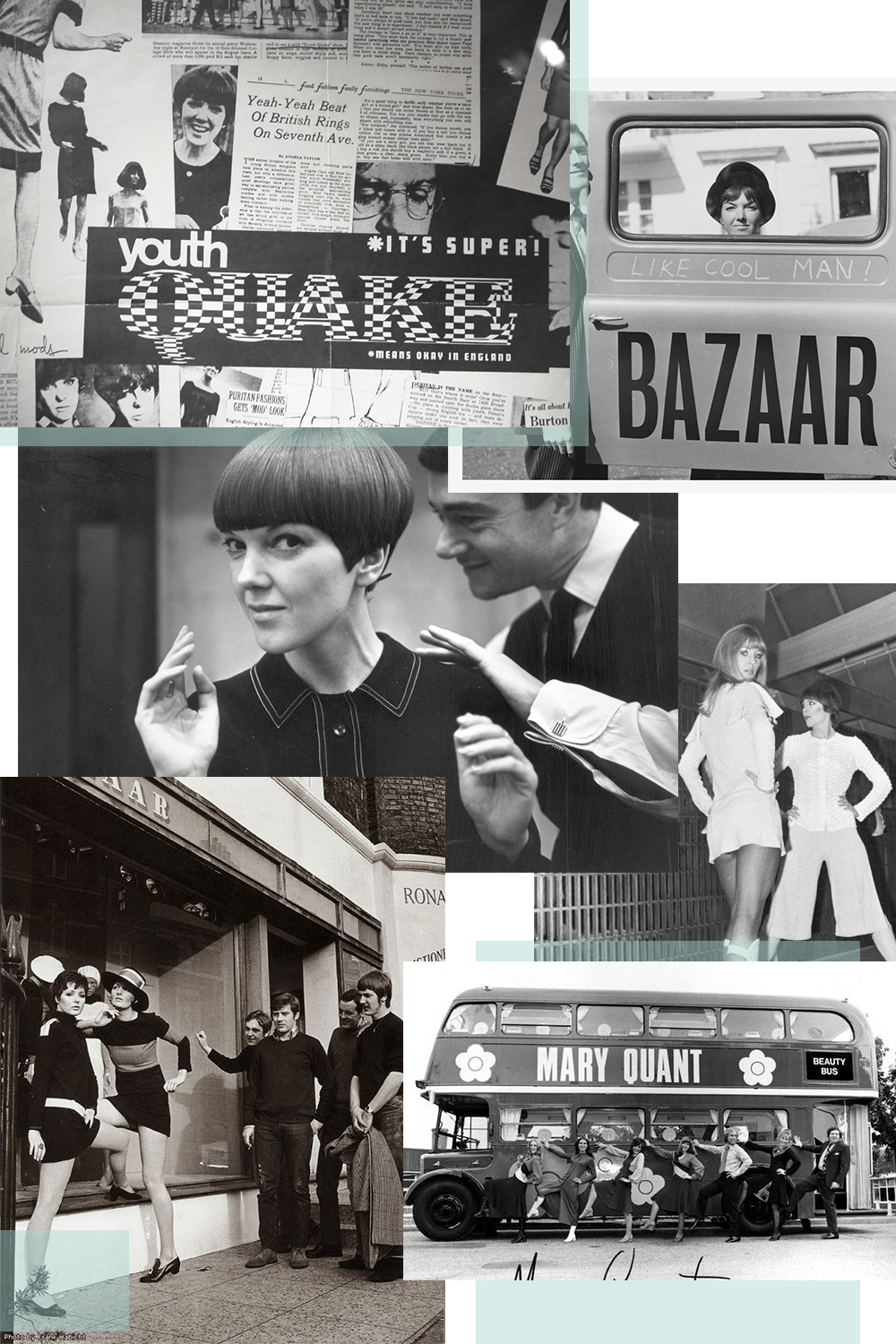 A place for passions and inspirations

To understand the arrival of concept stores in the retail world, let’s go to the West of London, in Chelsea. I had the opportunity to go to the Mary Quant exhibition at the Victoria and Albert Museum in London. British and famous tailor creator of the miniskirt, Mary Quant revolutionized fashion in England. Through her original clothing creations, at affordable prices, she wanted to satisfy a new market: young people. The Mary Quant exhibit traces the first 20 years of her creative career. From 1955, when she opened the very first concept store in the world, called Bazaar on King’s Road, to 1975 by the time she managed to establish a global fashion empire.

Completely furnished by designer Terence Conran, founder of the brand Habitat and The Conran Shop, Mary Quant’s boutique is a real place to artistic rendezvous and a mix of music, design, and art. The originality of this boutique meets an immediate success. Its singular character impresses, and creative personalities started to meet there to discuss their passions and their inspirations.

Mary Quant described her shop as “a bohemian world of painters, photographers, architects, writers, social figures, actors, … “. It was, therefore, a place of life, more specifically a place of debate, where sharing was much stronger than selling items. Among its loyal customers, Mary Quant could count on influential journalists in the fashion and design industry. They helped her build a good reputation and attract the London fashion scene.

Bazaar’s success was also based on the growing wealth and mobility of young people who have benefited from higher education and earnings. The purchase of clothing, therefore, becomes a leisure activity. In 1966, Quantrademarks, the logo of Mary Quant, is worn as a badge. This sign instantly shared the youthful spirit of her brand and allowed her to connect more to young customers. 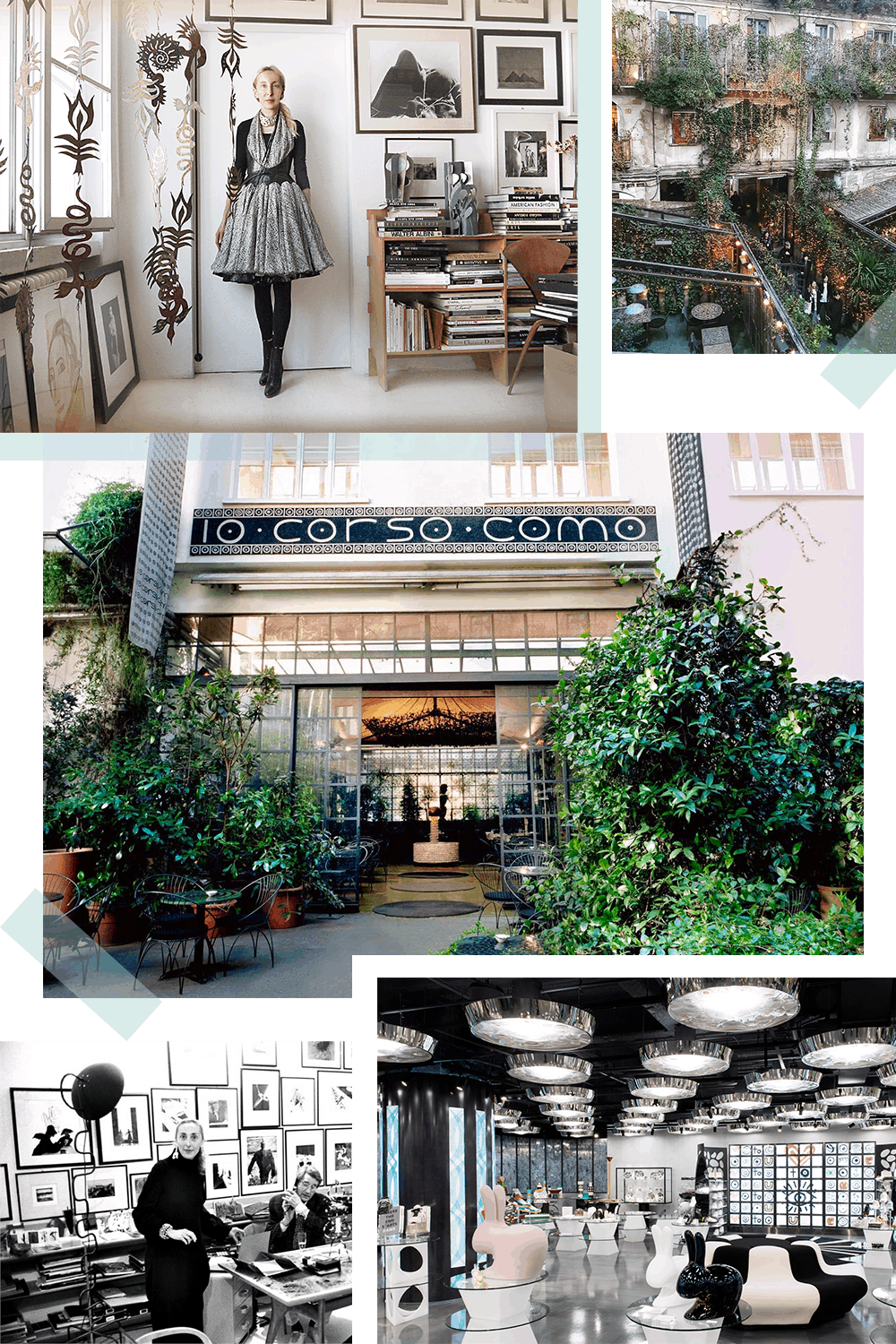 The term “concept store” appeared much later. It was introduced by the Italian sociologist Francesco Morace in 1991 to define the store 10 Corso Como. Founded in Milan in 1991 by Carla Sozzani, former fashion editor, especially for Vogue and Elle Italy. At the very beginning, Carla Sozzani wanted to make this place a bookstore where she could organize art exhibitions.

Passionate and open to all forms of art, Carla Sozzani widens her offer to share a little more of her vision of art and design. She added photography, furniture, clothing, accessories, and decorations. 10 Corso Como thus brings together objects for sale, works of art, books, clothes, accessories, and even souvenirs in one place, mixing commerce and contemplation, fashion, and art. Objects are not consumed as a business, but rather considered as art.

Services to enrich the place

10 Corso Como then becomes a place of fashion and culture in Milan. It gradually welcomed new services: a café, a restaurant, and a small hotel for her loyal customers, who wish to stay longer to better appreciate the exhibits. Hidden in the gardens in the back shop, cafe and restaurant provide a peaceful and quiet time, surrounded by plants and seasonal flowers.

Today, the store has expanded its unique selection of art, music, design, cuisine, and culture to Seoul, Shanghai, Beijing, and New York. Francesco Morace, both beyond art and fashion, saw something in this concept completely new and radical for retail. First called “concept shop ”, he introduced this new retail concept. 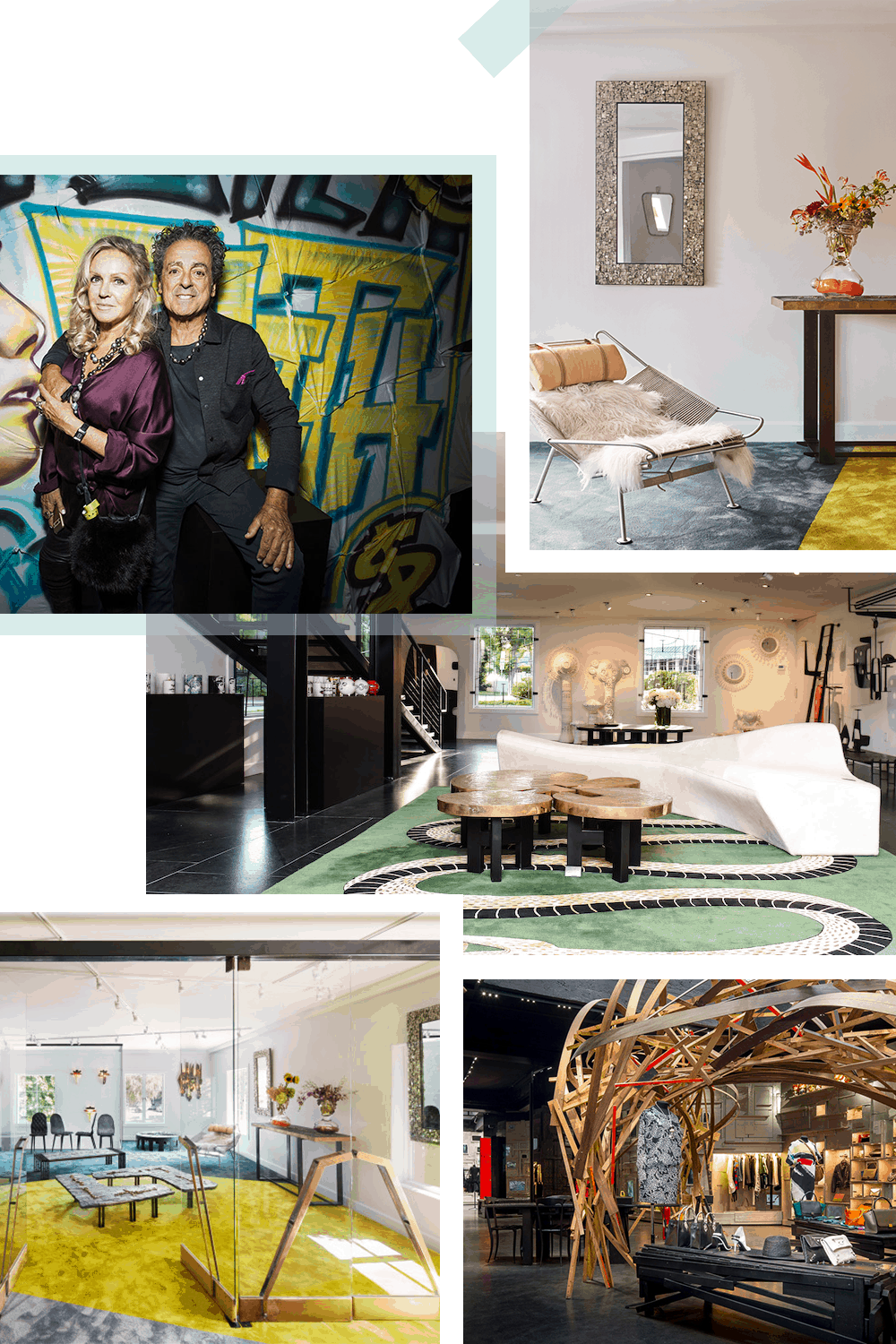 Experience at the heart of the store

It is of course in Paris that France saw its very first concept store. Leclaireur opened its doors in 1980. The couple Martine and Armand Hadida‘s ambition was to bring together fashion, art, design, and the art of life. It was the first outlet to reveal artists like Arne Quinze, Paul Evans, Borek Sipek, Pierre Bonnefille, and the brands Comme des Garçons, Yamamoto, and many others …

Now in Los Angeles, Leclaireur’s philosophy is to place the experience at the heart of each store by bringing fashion, design, architecture, and the visual arts. The ambition is to show that all of these disciplines belong to the same ecosystem, evolving, and in constant transformation.

The creation of Leclaireur is also a response to the power of big brands with remarkable budgets:

“In 1999, I was in New York. Prada was getting ready to open in Soho in the 2000m2 of ex Guggenheim, Issey Miyake partnered with architect Frank Gehry, Dolce & Gabbana presented their huge flagship store… Back in Paris, I was completely depressed.

How could we fight against such powerful brands? Brands we also highlight in our store on top of that. As small retailers, we were like little plowmen facing wealthy industrials, with their big machines and their GMOs.

Therefore, we decided to do the perfect opposite of large luxury groups. Rather than a flashy flagship with wonderful visibility, we created a secret space, hidden behind a carriage gate on rue Hérold. In the end, the success we met was beyond our expectations. »

Leclaireur always aims to offer visitors an atmosphere totally different from the one they’ve experienced before. Therefore, the pioneer continually surprises its customers by renewing frequently its offer, its windows, its merchandising visual, and its events. 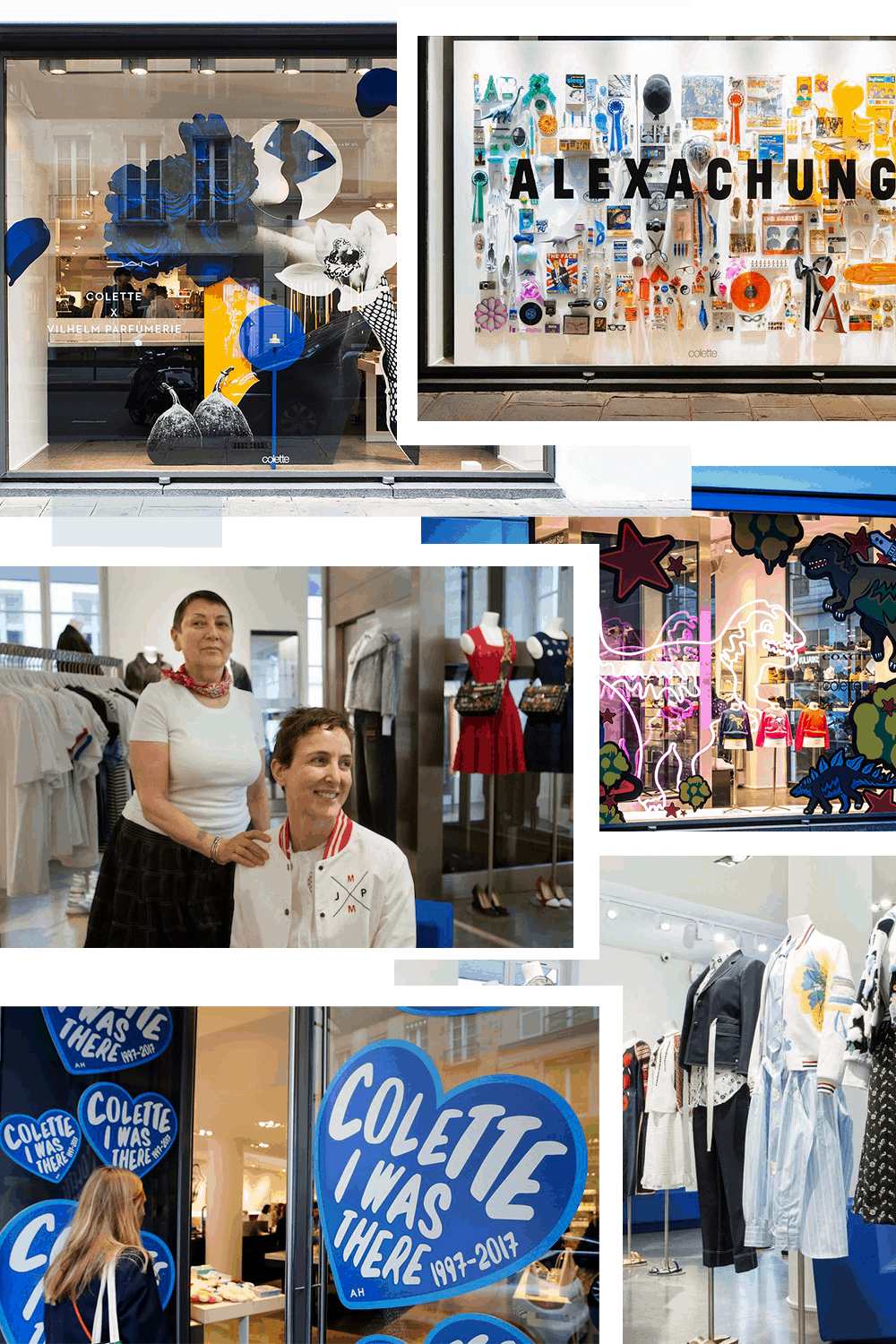 Rarity is the key

Also in Paris, the arrival of colette in 1997 also made an impression. Created by Colette Roussaux and her daughter Sarah Andelman, the store listed all types of trendy products: fashion items, perfume, design, music and publishing, photo and press, beauty articles, and high technology.

With her daughter Sarah Andelman, graduate of the École du Louvre, Colette Rousseaux was looking for products never seen before in France to create exclusivity and rarity. colette thus becomes trendsetter and precursor of trends for Parisian consumers, a benchmark in fashion and design.

Drawn by the French architect Arnaud de Montigny, colette sees its interior layout and its windows change every week. Also, in order to bring back its customers and make its point of sale a place-to-be, Colette and Sarah eventized their point of sale by organizing collection launch parties, cocktails, workshops, and monthly exhibitions promoting a favorite artist.

The sales staff was also a branding asset for the concept store. In 2012, mother and daughter recruited a hundred people. Among them, we find influencer salespeople with thousands of Instagram followers and having credibility in the fashion world. Like Elisabet (@UneMorueAParis) who, at the time, with more than 4,800 subscribers, participated in the visibility of colette. The sales teams and employees were true ambassadors of the concept store.

Another axis of visibility was the partnerships with large luxury houses such as Chanel, and recognized brands such as Comme des Garçons, to create thematic pop-up stores. In 2012, an average, the store counted a thousand visitors per day and four times more during the Fashion Weeks.

Colette Rousseaux retired recently. Therefore, you will not have the chance to visit colette anymore. However, the place is now hosting Karl Lagerfeld’s concept store, which is very impressive as well.

They beautify our cities

Since the creation of these historic concept stores, other entrepreneurs have followed, strongly inspired to create their vision of retail. Concept stores are growing like mushrooms, created by a single passionate owner, with a very individual aesthetic. The concept stores are the improved versions of classic local shops. More innovative, more digital, they help beautify the urban landscape by offering a unique experience, a new place you choose according to your values, your interests, and your affinities with the owner propositions.

Some concept stores are focusing on food. This is the case of L’Épicerie à Paris, a warm place where you can eat while reading a book library book or watching a classic seventh art. Other concept stores aim to share their social and environmental commitments. This is the case of Merci à Paris, which donates its profits to educational projects and development in Southwest Madagascar. And some just want to share their way of life and passions, Edith is a meeting point of fashion and design in Bordeaux and is supporting qualitative and responsible consumption. Some concerts and performances are also organized inside the store.

In addition to the four values ​​that characterize local commerce: quality, know-how, authenticity, and human, these historic concept stores have other assets that appeal to young entrepreneurs nowadays, but also brands and retailers:

I am a French blogger who lives in Hamburg and works in Paris. Since I moved to Hamburg 2 years ago, I developed a passion for all kinds of Concept Stores. I just love to discover the story behind the atmosphere of such original places. Therefore, every week, I meet inspiring business owners to talk about their story, the story behind their shop and their business choices (partners, suppliers, communication & marketing, visual merchandising,...). The purpose of this blog is to help people, like me, who wants to create their own business in a few years. The goal is to get inspiration, creativity, and motivation thanks to testimonies of courageous entrepreneurs from cities across Europe. 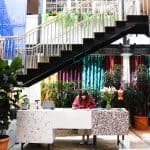 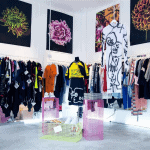 The story of Katrina and STUDIO183 in Berlin